The kindness of the Waxahachie Rotarians has been known throughout the county for their efforts to build wheelchair ramps for those in need.

Now that kindness has been recognized on a state level by Texas senator Wendy Davis and the rest of the Senate, thanks to the Rotarians’ efforts to help join Rotary International in the fight to eradicate polio on a global scale as part of it’s mission of “Service Above Self.”

The Senate recognized the Waxahachie Rotarians through a proclamation last fall for helping Paul Alexander, a Dallas man with polio and one of 10 people still living in an iron lung, in August. Senator Davis and Senate secretary Patsy Spaw signed the proclamation, and the Waxahachie Daily Light learned about the recognition this past week.

“The kindness of the Waxahachie Rotarians serves as an inspiration to us all, and Paul’s remarkable courage is a beautiful testament to the human spirit,” the proclamation stated. “The Senate of the State of Texas hereby commends the Waxahachie Rotary Club for their selfless act of service and honors Paul Alexander as a treasured citizen of our state.”

On Aug. 9, 2014, the Waxahachie Rotarians spent the morning building a ramp to help Alexander transport his 1,200-pound lung to and from the hospital more easily. This ramp project wasn’t like others the Rotarians had done for the Texas Ramp Project, an organization established in 2006 based on volunteers that build wheelchair ramps for disabled or elderly people who can’t afford to buy one.

“A Dallas Rotary Club, a big club, found out about this guy. They knew that we build a lot of wheelchair ramps out here,” said Mike Fenton, a Waxahachie Rotarian and ramp project coordinator for Ellis County. “So, they just called up and said, ‘Look, we’ve gotten Lowe’s to donate the material. Would you guys design it and do the labor?’ We said, sure, we’ll do that. That’s what we do through the Texas Ramp Project. It was a little different than our normal sized ramps. Normally, we’ll make the deck out of plywood, because even a motorized chair is not that heavy, but that iron lung weighs about 1,000 pounds. So we had a deck of 2-by-6’s, to make sure it wouldn’t collapse down. ”

“You can be cynical about people, but I don’t see that very much because we work with people all over the state,” said Jon Laine, the Texas Ramp Project executive director, adding the states recognition of the Waxahachie Rotarians was incredible. “You can do something in about half a day, and make a dramatic change for someone’s existence.”

The Rotarians’ efforts have reached a point now where fellow members anxiously waiting for the next project often approach Fenton, who builds the ramp in his wood shop, and ask him when the next project will be, he said.

Luckily, Fenton laughed, the Rotarians’ next project is Friday at the 200 block of Charlotte Ave.

“The clients vary all over the map. Some of them are about, ‘what else are you going to do for me?’ to — we’ve built several ramps for people who hadn’t been out of their house in several months,” Fenton said. “We built a ramp for a man from Ferris in August, and he hadn’t been out of his home since Christmas. There are a lot of people out there like that. Usually, they’re all very thankful, and some of them you really remember. Probably one of the best stories, I think, is one — and this wasn’t a Texas ramp Project, this was just one of our Rotary deals. The wife of one of our members was driving by and saw this guy hauling this kid up about four steps in a wheelchair. The guy was big and strong, probably about 35-40 years old. One thing led to another, and we talked to him, and we asked, ‘Is this your kid?’ He said, ‘Yup, I adopted him.’ We asked what happened and he said when his son was about 18 months old, the dad threw him up against a wall and he’ll never walk again ever, for the rest of his life.”

Knowing the child was going to continue growing and it would become harder to lift the wheelchair, the Rotarians installed a ramp.

“He kind of fell all over himself to thank us,” Fenton smiled. “You don’t know how lucky you are, really, that you can get out of that chair and walk.”

To help volunteer or if you know of someone who needs a wheelchair ramp, call Fenton at 972-898-4991. To find out more information about the Texas Ramp Project, visit www.texasramps.org or to volunteer, email [email protected]. 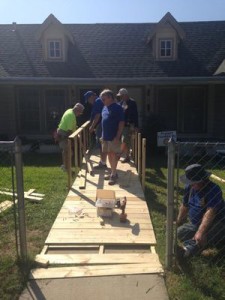 The Waxahachie Rotary Club members built a ramp Saturday morning for a Dallas man to help him transport his 1,200-pound iron lung to and from the hospital more easily. Paul Alexander, who was diagnosed with polio at age 6, is one of 10 people left on Earth who use an iron lung to help him breathe. 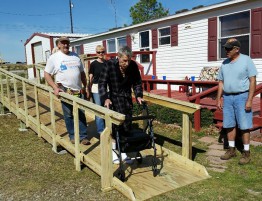 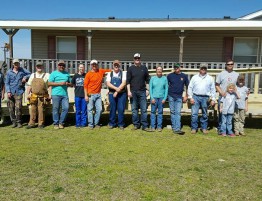