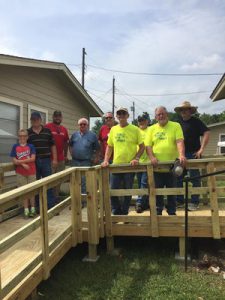 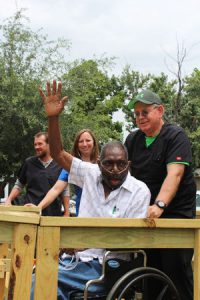 A Roxton man was able to move back into his home Sunday, thanks to collaboration from local health care agencies and service organizations.

When 74-year-old Claude Adams was admitted to Legend Healthcare on March 25, his condition was poor.

By that time, Adams had spent weeks at the hospital being treated for Chronic Obstructive Pulmonary Disease.

“He thought he was coming to us to die,” said Renae Stone, director of social services at Legend.

Instead, he worked with a team of physical therapists who helped him regain mobility.

“When he came into our building, we treated him bedside. He had a poor range of action and a lot of weakness,” said Dr. Raymond Arquillano, physical therapist at Legend. “We started trying to improve what he was able to do, doing a little more each week.”

Arquillano explained Adams’ therapy started with sitting up, moved to standing and balancing, then progressed to walking a few steps. Each week brought new goals, which motivated Adams to keep working.

“It takes hard work, but I don’t mind,” Adams said. “A lot of people say they want to get better, but they don’t want to put in the work it takes.”

“You did it,” agreed Occupational Therapy Assistant Kelly Wickersham. “We never had to make you do anything.”

Adams said at times he wondered if he would ever leave the healthcare facility.

“I would get these dark thoughts sometimes and wonder, ‘Will I ever walk again?’ But I would just put it out of my mind,” he said.

All that work and positive thinking paid off.

“His activity tolerance is so much better now,” Charity Blecher, PTA at Legend, said. “His resting stats are down, and his oxygen stats are where they need to be.”

“His gait is now about 100 feet before he experiences shortness of breath,” Arquillano said. “It’s a very big leap for him and we’re happy with how he’s progressed.”

After more than 16 weeks of effort and improvement, Adams was well enough to go home.

Getting into his home posed a new problem, however.

“I have seven stair steps to get up to my house, and it’s on a hill,” Adams said.

That’s when Paris Kiwanis Club was contacted. Since 2011, the club has participated in the Texas Ramp Project, which builds ramps for people in situations like Adams’.

Patterson said volunteers with the project build 35-40 ramps each year with ramps averaging 25-30 feet long. At about $20 per square foot, the cost of a single ramp can cost $500-$600, a bill covered by community donors and foundations like the Saint Joseph’s Community Foundation.

“Saint Joseph’s has been with us from the beginning, along with others, including the Paris Legacy Foundation and the Lennox Foundation,” Patterson said, explaining the Paris Kiwanis Club’s branch of the Texas Ramp Project covers not only Lamar County, but also Fannin and Red River counties. “We could not do this without the support of community organizations and foundations.”

Louisa Kessel, executive director of Saint Joseph’s Community Foundation, said Texas Ramps is one of many ways the foundation works to help the community.

“We also provide medical grants and scholarships for students, among other projects,” Kessel said, explaining the foundation has given $1.5 million since 2004.

In order to get a ramp for a patient, a healthcare provider or social worker must make a referral online at texasramps.org.

“It takes about five minutes to make the referral,” Patterson said. “The referral includes information about where the ramp needs to go, the address and the person’s diagnosis. I receive the email, and we schedule a day to measure and a day to build. We usually do it on a Saturday morning with seven to 10 volunteers. It’s a good project for us as a club because it’s hands-on, and it’s only a few hours of work. And the clients are very excited to get their ramps. A lot of times, they’re almost in tears because they can go in and out of their homes by themselves.”

Getting in and out of his home wasn’t Adams’ only concern, however. He also needed additional medical care to make sure he didn’t end up in the same situation as he was in February.

“Once he’s home, that’s where hospice steps in,” April Wilson, RN, BSN, of CIMA Hospice, said. “Hospice is about helping people enjoy life — their family, friends, pets and activities — for as long as they can.”

“Hospice allows patients to live at home, which is where most people want to be,” she said.

When asked what he was looking forward to most about being home, Adams answered, “eating,” explaining his sister would cook for him until his provider services kick back in.

On Sunday, employees of Legend and CIMA helped Adams up the ramp of his home of 10 years in Roxton and settled him into his living room.

“This feels so good,” he said, sitting back in his recliner. “You don’t know how good this feels. It’s great being here.”

Adams already was making plans for his first evening home, including eating a long-awaited Subway sandwich and catching a Rangers game on TV.

Wilson said volunteers are always welcome at hospice to read, play cards and chat and volunteers are also welcome to help with the Texas Ramps Project, Patterson said, as are donors. The Saint Joseph’s Foundation also accepts donations, Kessel said, and much of its funding comes from its annual Texas Underwriters Ball, slated for Sept. 24. Additionally, the foundation is accepting grant applications through Oct. 31 at sjcfparis.org. 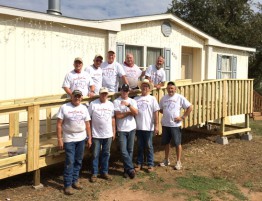