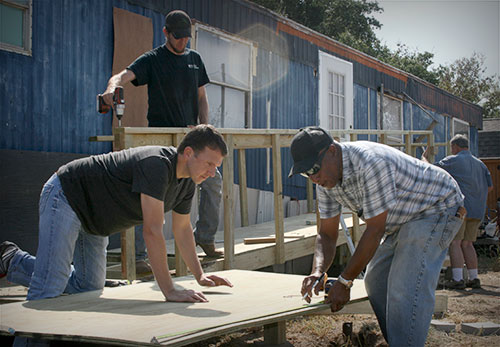 The Breckenridge Lions Club ramped up its community service this past weekend when it its members joined forces with a statewide group to build a wheelchair ramp for a homebound local resident.

The Texas Ramp Project’s mission is to help organizations like the Breckenridge Lions Club build wheelchair ramps for Texans who cannot afford them freeing them from being homebound and getting them out into the community.

“When we go into a community, like Breckenridge for example, we look for people that are service- or mission-oriented. Sometimes it’s a church; sometimes it’s the Lions Club. Once we find those people who have that mission outlook, we try to take them through what it takes to build a ramp,” said John Laine of The Texas Ramp Project, who was on-site with the Lions Club volunteers last weekend, providing them hands-on training.

Lions’ Club President Tom Cyprian said his group became interested in joining the project after Laine visited Breckenridge and told them about the project.

“He was telling us about the Texas Ramp Project, and he had a referral of a young lady here that was in an auto accident that needed a ramp. And we started there. The first ramp we built was for her approximately two months ago, and the word just sort of spread.

This is a second one we built,” Cyprian said Saturday morning as he and other Lions Club members worked on a ramp for a second Breckenridge resident.

Laine said building a ramp is not really that hard; it’s just a matter of knowing the rules to follow when you’re building a ramp. He said when Lions Club completes the training his group provides, they are qualified to of receive an address where a ramp is needed, go out and determine what length ramp and what design of ramp needs to be built and then build it themselves. He said the average ramp takes about half a day.

After the training ,The Texas Ramp Project will continue to support the organization by paying for the lumber and by providing them with the referrals for people who need ramps.

“We can do all that support work that’s not so much fun, like providing insurance and everything else a nonprofit goes through. Then, our volunteers are free to do the stuff that’s fun, which is go out and build the ramps and have a nice time on a Saturday morning,” Laine said.

According to Laine, a group needs to build about three ramps to get up to speed building ramps. For example, he said, the one the Lions Club was working on Saturday was different from the one they built a few months earlier.

After building three different types of ramps, Laine said, the volunteers see most of the Project’s building techniques. At that point, if they still don’t know something about a project, they’ll know enough to ask the right questions and his group is always available to them.

Laine said another important part of his group’s mission is training the local healthcare community about how to refer someone who needs a ramp. He said all their referrals come through their website referral form, but they only accept referrals that come from third-party healthcare providers such as a doctor’s office, home health worker,or dialysis center.

“What we want to do is train the health community in Texas how to find us when they find somebody who needs a ramp. Once they do, they will continue to do this because they know what happens — somebody gets a ramp. When we get the ramp built, we’ll take a picture of it and send a picture to the person who made the referral to show them what we did with their referral.

He said The Texas Ramp Project gets about 60 percent of it funding from foundations, 20 percent from state agencies like the Area Agency on Aging and Adult Protectives Services and 20 percent direct donations by churches civic organizations individuals and business.

Cyprian said his group hopes to develop a warehouse to store materials and equipment for building the ramps to help streamline the process. He adds that anybody is welcome to volunteer; they don’t have to be a member of the Lions Club to help out.

“We have some today that are not part of Lions Club volunteering,” he said Saturday. “Hopefully in the future we can get more involved. Anyone who would like to help, we would welcome their help. We sort of foresee in the future we’re gonna have more needs for ramps within our community. The more help we get, the more ramps we can build.”

PHOTO CAPTION: Michael Roach (left) and Breckenridge Lions Club president Tom Cyprian measure boards to be installed on a wheelchair ramp they are constructing. Lions club members teamed up with The Texas Ramp Project to learn to build ramps for local residents who need them but cannot afford them. (Photo by Tony Pilkington)